Well, darn it, I'm still under the weather, so I haven't been up to making anything. I'm starting to have paper-crafting withdrawal! I dream of adhesive runners and brads and designer papers. My confidence is faltering terribly. I really, really want my brain back (it's the brain fog that's the worst part of this, and the tiredness).

BUT fortunately this week I received an award from my dear Aussie friend Leonie at Stamp-a-latte. Actually, she had several rewards on her blog that she had received, then she posted who she was rewarding them to, so I'm not sure if I was supposed to pick one or more. But I decided to be humble and just pick one -- that seemed the right thing to do. So here is my chosen award: 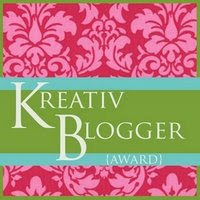 I'm supposed to choose five other blogs to give it to ... that's always hard because I don't want to leave anyone out, and I'm always afraid I'll duplicate or that people aren't taking awards, but here goes:

So, ladies, the award is now yours! Remember to pay it forward to five other bloggers.

I did manage to start pulling photos yesterday to put in my Library of Memories "file boxes" so I'll be ready to scrap when I'm finally feeling better (I already have a ton of photos in the boxes -- this round is from the last year or so). This involves taking photos out of their "holding" albums, deciding what category and sub-category the photo fits (i.e. "Things We Do" then "Computers" ... or "People We Love" then "Dan/Dad/DeDaddy"), then filing it in the proper box under the proper sub-category division. Then when I'm ready to start scrapping, I can decide what kind of mood I'm in, or what sounds like fun to scrap that day, pull those photos and go for it! The big problem is, I take a jillion photos sometimes (like there were 52 photos alone of my grand-nephew from his first visit to us when he was three months old!) and it's hard to weed out what I know I'll scrap and what I won't. In his case, I decided that whatever photos I'll have left over (and I know I will), I can make into a mini album for my mom. I don't put every single photo I take into the files for scrapping, but sometimes it's really hard to cull enough of them. So often the decisions end up being made as I'm making the page(s). Probably not as efficient as Stacy Julian does it, but it's the only way I've figured out that works for me (so far), being one of those "Oh, I hate to leave THIS picture out!" people. It ends up being a matter of what fits on the page.

I've GOT to get feeling better, because there is SO MUCH I want to do up in that loft! Grrrrrrr!

Well, that's really all I have for now, sadly. I was really counting on feeling better today, but I guess I overdid yesterday when I did feel better, and now I'm paying for it. That and the cedar pollen count is sky high today, so that might be part of it. Anyway, I'll quit whining now and get on with my day.

Blessings!
Posted by Stacy at 3:24 PM

Hi Stacy
Thanks so much for the award
I have never won a blog award before so i am blown away!!!
I have one problem though
how do I get it onto my blog???
I have tried copyoing it but that doesnt work
any help would be appreciated

I do hope that you are feelin better