Faithbooking, and other things

First, before I get too "deep" into my blogging, I want to thank my newfound friend Becky, who I met at Paper Craft Planet, for the Fabulous Blog award she gave me on Tuesday! Becky has her own blog called "A Diamond in the Rough," and you should DEFINITELY go check it out. She makes beautiful cards! Becky, thank you so much for this award! I am truly humbled and honored. Here's the award:

I'm supposed to tell you five addictions I have, so here goes:
1. The Newsboys/Phil Joel (big surprise there, huh?)
2. The Internet. Gotta have my morning CNN, FOXNews, local TV station news, local newspaper, comics hit, then later on it's the New Zealand Herald, the blogs I follow and then Paper Craft Planet. Daily. Without fail. Or I feel like something's drastically wrong!
3. Iced tea (decaf, artificially sweetened because of my various health issues). Right now the acid's getting to me, but I just ordered some drops that are supposed to de-acidify it, so hopefully that will work. It's been tough just drinking water!
4. Peanut butter. Yep. I am a peanut butter junkie. Fortunately, none of the peanut butter I love has been affected by the recent salmonella outbreak.
5. Talking to my mother. She lives down the street from me, but if I don't talk to her at least by phone every single day, I go crazy (she does, too!). My dad will say, "What could y'all possibly have to talk about for an hour on the phone? You just saw each other yesterday!" Men do not understand this mother-daughter connection thing. Besides, she's also my best friend!

Okay, so that's the five addictions I thought of off the top of my head. There may be others, but you'll never know, mwuhahahahaha! (I am, also, addicted to words, as you probably know. Reading, writing, talking, I love words. As the little "writing muse" my mom gave me a couple of year ago says, "I love writing. I love the swirl and swing of words as they tangle with human emotions." James Michener said that, and I couldn't agree more!)

I will get to assigning the award to five bloggers soon ... gotta do major narrowing down!

Okay, on to paper crafting! I made a card yesterday for the upcoming SHINE challenge. This week I decided we would do cards/paper crafts that were reflective of our position in Christ, the "who we are" in Him, or that show our value to Him. So here's the one I made for the example: 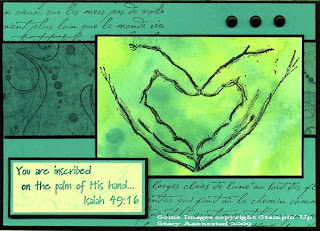 I have always thought it so beautiful to think that God loves me so much He would write my name -- inscribe it -- on the palm of His hand! (Inscribing implies permanence to me, more like carving.) It ties in with the scars in his hands from hanging on the cross (although I know that, technically, those are more likely on His wrists because of the logistics of crucifixion). So I love the verse that says "See, I have engraved you on the palms of my hands ..." The stamp here (from Heart & Soul Rubber Stamps, as is the image of the hands) is an adaptation of that same verse.

I honestly think the card is a little "busy" with the script bits in the corners. I had intended to play on the "writing" theme, but in the end it just was a bit much, I think. Oh, well.

SO, if there's anyone left still reading at this point, I have decided to start my Faithbooking project (technically called "Scrapbook Your Faith") over at Paper Craft Planet in the SHINE Christian Crafters Challenge group. It will begin on Monday, Feb. 2 (this Monday) for anyone of you who might be interested in participating. You would need to join PCP and the SHINE group to do it. If that's a problem and you don't want to do that for some reason, let me know and I might be willing to do it offsite, too. I will post weekly topics to scrap about (such as "This I Believe" or "Struggles and Scars"), and I'm planning on doing it for ten weeks, so we can have a nice little scrapbook started (and I think it would be a good size for anyone who wants to be done when it's over). Also, I'm going to come up with a "card book" sort of thing for the crafters who don't scrapbook, but who might want to participate, anyway. I'm going to figure out a way to just make the pages as a sort of card, but not something you would send to someone, rather something you would put together into a booklet when it's done. It's my hope that when the ten weeks are over, people will want to continue on their own (or even do a "Round Two" in the group), and make Faithbooking a part of their scrapping lives.

I think Faithbooking is a fabulous way to tell your faith journey, to explain to others why your faith (in this case Christianity) is important to you, how it shapes your life, and how you hope to pass it on to your children, grandchildren, nieces, nephews, neighbors, anyone who matters in your life who you hope will read your book someday. It's creative, and it's somehow "easier" than sitting down to write everything out. I'm just bad about not sitting down to do it. So I really hope this project will be my springboard, too! It will certainly get my little lazy behind off the sofa, because I'll have to make the pages ahead of time for examples!

Well, I kept Aidan home today because of his cough, and because our doc's office closes at noon on Thursdays and I really wanted to get him in. We couldn't see the Physician's Assistant who we really, really love, so I was a little worried the doctor wouldn't give him anything (the doc has a bit of a reputation for being stingy on the meds if you don't have fever or something obvious). I prayed about it beforehand, and blessedly, Aidan "performed" wonderfully the entire time he was at the doc's, coughing his head off and wheezing appropriately (not on purpose, BTW, that's just how bad things were at that point!) So the doc decided A probably is suffering a recurrence of the allergy-induced asthma he used to have when he was little. He did a broncho-dialator treatment on A while we were there, and that really seemed to help, so he gave A a sample "rescue" inhaler and a daily asthma inhaler to try in the hopes that this will help with the nasty cough. So far it seems to be working. He's still coughing, but not nearly as bad as the last few nights. I mean, I thought he was either going to burst a blood vessel in his head somewhere or cough up a piece of lung! (Okay, that last part is a bit of exaggeration, but I have heard of people who have died of severe coughing fits, so Freakout Mother Queen that I am, I was pretty nervous!) I do think he's also got a sinus infection, though (snotty nose, etc. -- trust me, I would know!) The doc says the only REAL way to tell if a person has a sinus infection is to x-ray their face. Um ...? The PA can tell on me just by looking up my nose. So I get antibios from her. Never from him. (See why I don't like to go to him? I also get the "antibiotic lecture" from him.) So Aidan will just have to tough out the sinus thing, and I'm not sending him to school tomorrow, either. He must feel bad with this (although no fever), because he was cool with staying home. Normally he says it's too much of a pain to make up the school/homework. My thinking? The girl he likes has been giving him a bit of a cold shoulder lately, so he's fine with not having to be there to deal with that!

Okay, I'm writing a book, and I really need to get over to the SHINE group and post the challenge for tomorrow.

DO let me know if you'd like to be in on the Faithbooking project (or just go over to Paper Craft Planet and the SHINE group and sign up!)

Sorry A is so sick. If it helps, I recently read that sinus infections clear up at the same rate with or without meds. I usually use the saline nose spray constantly and that seems to help a great deal.

Thanks for your thoughts and prayers for the labs for H. He goes in on Wed (I think), so we should know something then. I'm trying to decide if I should demand to be there, or let him go alone. He's not worried, so I don't think he'd appreciate me being there.