I have a confession to make -- I joined a social networking site (not going to tell you which one, since the last thing I need is a hundred people wanting to be my "friend"). And it is eating my time like my cats eat food! (This would be majorly frequently.) Not only have I found some long lost friends from my high school youth group days, the semester I spent in London, our old church in Arizona and other places (and that's the reason I joined up, and it's a very cool thing!!), but I have discovered the time wasters -- the stupid little "tests" and quizzes, the things you can send to your friends, some of which are incredibly cute and addicting. And if, like me, you have an addictive personality, it can be fun -- and it can be huge trouble because you WASTE ALL YOUR TIME!!!

BTW, if you're interested, the Strong Woman of the Bible that I am is Mary Magdalene. And which Star Wars character am I? Han Solo, of course! (that one rocked).

But I have, as I said, caught up with old friends, and that is so awesome!! Seeing their photos and the photos of their children is so cool! And I now have a very convenient way to keep up with my nieces. We never call each other, so now we actually communicate once in awhile!

So, anyway, it's a good tool when used properly. I just have to remember to be responsible and not get sucked into the time-wasting stuff. (Oh, boy, Phil Joel's "Don't Waste Your Life" song, which is all about spending too much time on video games and on social networking sites, comes raging to mind here -- "Don't waste your life, it's the only one you have." That's just part of the chorus.)

AND NOW ... on to scrapbooking! I spent all day over at my friend Elizabeth's house yesterday (well, about 5-1/2 hours), and I got two-and-a-half layouts done. She got six done in that time. Does that tell you anything about how slow I am? Of course, I do tend to put a lot more layers and stuff, but still! I haven't scanned the finished ones yet, so I can't show them to you.

However, I CAN show you the other 6"x6" Favorite Photos LO I finished over the weekend, just as I promised last post. So here it is: 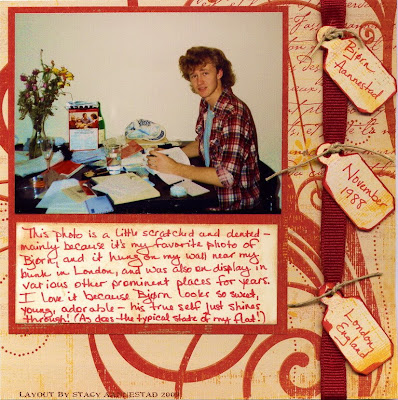 This is my absolute, hands-down, ultra-mega favorite picture of Bjorn. I took this twenty years ago when we were on our London Semester (which is where I met him) and he was just a baby -- did I rob the cradle or what? lol (I'm five years older than him.) Bjorn hates this picture, complains that his hair was too long and bushy. But I LOVED his long hair! And he was so skinny then! *SIGH* Oh, for those days-gone-by. Although, back then he wasn't a Christian, so I'll take him the way he is now, thanks, grumpy mid-life crises and all. ;-)

When the photo was taken, he was over at our flat (I shared it with four other girls -- well, young women, really), doing some homework. This was the typical state of our dining table, at which we did not eat because it was always piled with stuff. Including wilting flowers! lol Bjorn's flat was right next door, but because of the very interesting way in which the building was laid out, it was down a level and a half from ours. I met him, the boy next door, literally out on the front sidewalk the day we first got to London. It was most definitely a God-thing.

So, that's really all for tonight. We spent an hour this afternoon with Aidan's college-prep counselor about all the things he needs to be doing right now towards college planning and preparing. It sounds so exciting! ... until I stop and remember that means he'll be leaving home in two years. And then I want to just sit and cry. Ah, the joys of being pre-menopausal! lol
Posted by Stacy at 8:27 PM

Stacy....If you are talking about Facebook, look me up. I am on there. I am under Lynn Bosman MaGill or cross2stitch2003@yahoo.com

What a great story Stacy, great picture. I have an award for you at my blog, if you would like :).