I got a sweet blog award from my sister in Christ, Lynn! 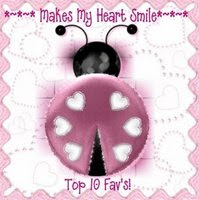 Thank you, so much, Lynn, for thinking of me!
I'm supposed to come up with ten other people to reward, and that may take awhile, so I won't take the time to do that right now ... stay tuned for the list!

Well, I realized I had already taken a photo of the Easter card, it was sitting here in my files all the time! Now I have three Easter layouts I need to scan and stitch so I can show them to you. So much to do!!! ;-)

Here is the Easter card, without further ado: 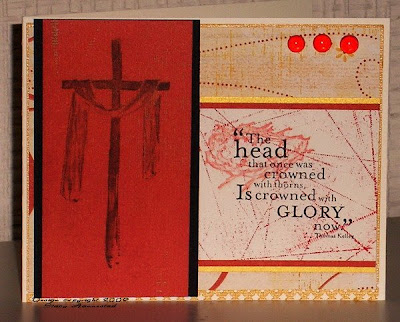 I bought this Easter set from Club Stamp (Club Scrap) a year ago, but by the time I got it, it was too late to make cards to send (since I'm the world's biggest procrastinator), so I've saved it all the way until this year to use! And now I have a TAC Easter set that is gorgeous and I want to use it, too, but Easter has, once again, crept up on me and I will be lucky to make cards for my own family!

I don't have the card handy to look at, so let's see if I can remember the other ingredients:
DP: K&Co.
CS: SU, The Paper Company
Inks: SU, Ranger Distress
"Drops of blood": Michaels, clear, colored with permanent marker -- I think by Crayola? -- on the back
Misc: Crystal Effects glue; EKSuccess punch

Can someone explain to me why, in heaven's name, it costs almost $1000 to have your house de-termited? And we're not even talking the tent thing, here. We had a termite guy come out on Thursday to give us an estimate on how much it would cost to rid us of the colony of happy termites that live in one of our walls, and to prevent any more from moving in anywhere in the house, "guest house" and storage room, and it was that much! And the deal is, we really trust this guy and his company, and will probably go with them. They have a ten-year warranty on the chemical, as long as we pay out another $125/year (for yearly inspection). At least I think that's how that works. Anyway, it's ridiculous how much it costs to maintain a house. If I'd really thought it through, I think we would've stayed in a rental house forever. (Okay, probably not, but still ...) I hope termites don't eat cardboard boxes, because that's what we'll be living in after Bjorn retires, at the rate we're going.

Anyway, that's all for today. My aunt is up from Houston, staying at my parents' house, so we're going over there for dinner and to visit. She's a very cool lady, I love visiting with her.

Hey, great, awesome news! "Treasure Quest" -- the Discovery Channel show about Odyssey Marine Exploration, which is a company that does archaeological and commercial shipwreck exploration and recovery (old ships) -- is being renewed for a second season!!!! Wooooooooot! We just watched the last episode of the season Thursday night and were feeling so bummed, and then the announcement came out on Friday that Discovery had decided to go another season, so we (Aidan and I) are totally psyched. It won't show until ... I don't know, next spring? This fall? But we're okay, because it will probably be like this for us: Mythbusters until Fall, then Storm Chasers (for me -- Aidan doesn't like watching tornadoes, for some reason), then Treasure Quest again. *SIGH* Life is good. :-)

Okay, the kittehs are demanding their evening "treat," so off I go to acquiesce.