So, I just feel like blogging even though I haven't been in the loft (other than to put things in it) for what feels like eons.

I have a nasty migraine tonight. Bjorn's parents are coming tomorrow. Somehow the combination figures. The migraine is hormone-related, so it has nothing to do with stress. Since we started with the housekeeping service, that stress has blissfully been relieved. Sure, we still had things to do to get things ready for them, but none of that running around like a madwoman, barking orders at everybody for two days straight and nearly killing myself to get the house mother-in-law ready.

But I marvel at the consistency with which I have some kind of health issue whenever I'm around them. I actually called my mother this morning and said, "Please pray that I don't end up having to go to the hospital while they're here!!" It has become a joke (that I don't like) about my hospital visits that seem to happen around them. Only two out of three, though! As far as ambulances are concerned, anyway. Yeesh.

I've been spending (way too much) time lately doing the genealogy thing. I've gotten to the point where there's really just not a whole lot more I can do online, but I keep trying. And it's frustrating. But since I've hit the black hole of lack-of-scrap-inspiration, I don't know what else to spend my time on. I have managed to find some good stuff by sheer perseverance, but I really wish I could just get in the car and drive to some of these places and get the records I want from the courthouses, etc. Of course, I could just drive to downtown Austin and go to the General Land Office, the library, and the other records-holding places down there for a start, and I don't even do that. I am so lazy!! The thing is, so many of my more recent ancestors were right here in Texas, and some of them in counties not so far from mine, so it would be a nice little day trip for some, a couple of days for the others (I was gonna say weekend, but the courthouses aren't open on weekends). A couple are pretty far off in West Texas.

My folks have given me some of their old photos to scan, with the intention that I will eventually get all of them digitized. I find I really enjoy scanning the old-old ones, but the newer ones (1940s and 1950s) don't have as much "cool factor" to them, because they're so much more recent. And because there are jillions of those and I don't think I'll ever get through with them, and this is just the tip of the iceberg!

I love the old photos, though. Take a look at some of them: 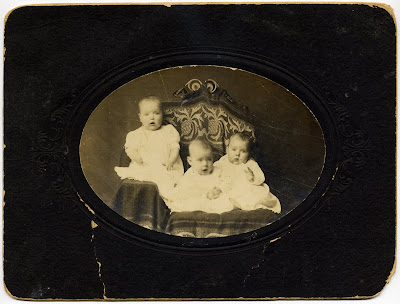 Remember my grandmother who passed away last year? That's her on the right, in about 1913 or so. The other two babies are her cousins. I love this picture, because it floors me that my incredibly capable, wise grandmother was ever a baby! lol 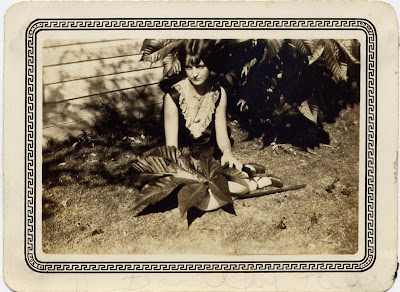 And this is her in 1929 when she was a teenager. Quite the flapper queen! (Well, a wannabe -- she was way too much of a good girl to be a REAL flapper!) 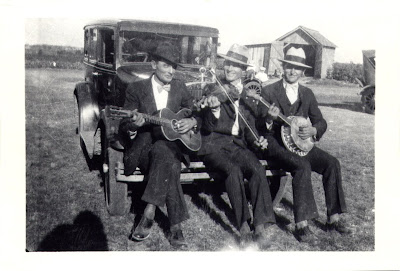 The dude (and I mean that in the old sense of the word) on the right with the banjo is my grandfather, who later married her. He was ten years older than she was! Boy, do I love them!!! 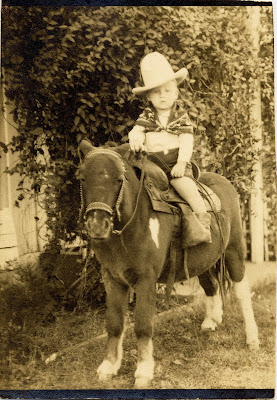 This is my daddy when he was three years old. Li'l Texas cowboy dude! Hee! 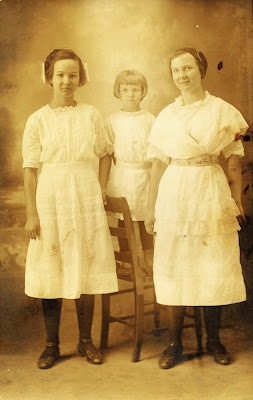 And my dad's mother (in the middle) with two of her sisters when she was five years old. Aren't they cute in those old-timey clothes?

I guess I can save SOME photos for another time (don't worry, there are plenty of them!)

It's interesting to find out about your ancestors. We were totally on the WRONG side of both the Irish issue (we were the usurping protestants), and of the Civil War (Confederates all). But at least we got it right in the Revolutionary War (colonials, rebels, whatever you wanna call us, we were fighting for independence), and we done good by Texas!! I think the Texas thing just makes up for all the wrong stuff. That whole Texas heritage is really the part I'm most proud of.

I ran across the fragmented memoirs of my (I think) 4-greats grandmother as I was leafing through the family history notebook I'd put together a couple of years ago. There is some amazing stuff in there! I'll have to post some of that at a future time. She was a little girl of 12 when the whole Alamo/Goliad/San Jacinto stuff (Texas won her independence at the Battle of San Jacinto) was being played out, and she knew several of the people who were instrumental in the whole birth of Texas. She even watched the Battle of San Jacinto with her family from a thicket! But that's a story for another day.

I really have to go now -- can't keep this up with the headache I've got. On to bed (where I get to lay down in a dark, quiet room with no distractions and REALLY think about how much it hurts!), and then tomorrow Bjorn's parents arrive!

Have a wonderful, safe Memorial Day weekend if you're here in the United States. And all the rest of you, have a wonderful safe weekend, too!

Okay, I feel like I owe my readers an explanation or apology or something for not being faithful lately. So, I apologize, and here's my (probably lame) explanation:

1) I am in serious Craft Slump mode. At the moment I'm not the least bit interested in setting foot in my craft loft. It's not so much a loss of mojo as a loss of interest. I actually found myself thinking the other day that I might just sell all that scrapbooking stuff and go back to sticking photos in albums, or maybe just have everything printed out in Kodak/Snapfish/whatever photo books (this was after doing one for my MIL for Mother's Day). It's SO easy, it looks so cool, and ... I don't know. I'm just not "there" with paper crafting right now. I hope this is just a phase!

2) I have been spending (way too much) time doing family research. It's like an addiction, it kinda feeds into my collector's mentality. I'm collecting ancestors! lol No, really what I'm trying to do is collect information about my ancestors. All I can get. I don't know if it's sad and pathetic to do that or if it's a valuable family service. Yesterday I received an obituary I had ordered for my grandmother's maternal grandmother. She had committed suicide after being sent to what we would now call a "state hospital," but what back then was lovingly and tactfully called a Hospital for the Insane. In this very tasteful and loving tribute to her, they talked about her going bonkers (not using that term, of course), about her being "convicted" of being insane, and then proceeded to give details of how she had hung herself in her "cell". It was horrible and depressing and I really wish I hadn't read it! I wasn't aware that having emotional problems was a crime. And based on what my mother told me about her (the g-g-g grandmother's) situation, her husband drove her to it. What made her "insane" was that she was suicidal in the first place. (And probably OCD -- her husband beat their children, which was often considered "normal" in those days, but not to her!) So they ship her off to a "Hospital for the Insane" where she sank into even more despair and hung herself. Apparently her husband spent the rest of his life trying to apologize and make amends to his children for his behavior and her death. Some forgave him, some didn't. So ... among all the wonderful stories of loving, adored farmers, ministers, store-owners, etc., comes this one. Is it something I want to preserve? I'm certainly not going to let Aidan know about it ... he doesn't need that "legacy" hanging over his head if he ever gets that depressed. Thorns among the roses, I guess.

I'm not even sure why I told YOU this, except that I'm a writer and I have a penchant for the dramatic.

Anyway, in addition to info gathering, I've been photo scanning (the old family photos). That in itself is going to take awhile.

So ... I haven't gone away, but I'm kinda on a crafting "sabbatical" -- unintended, but there ya go. I did make my mother's Mother's Day card (haven't scanned it). I've also got an unfinished layout on the craft desk waiting to be completed. And I did a digi layout for the SHINE group, but I'm going to have to tweak it a bit before I post it here.

I'm also going to close out the SHINE group, or transfer ownership to someone else. It was going along fine for awhile, but I can't get any participation at all now. I don't know where everyone has gone, or why, and I know people get busy, but I think my challenges/projects are good and worth pursuing, so I'm not sure what's up. I don't want to keep putting time and effort into it if no one else is going to participate but me, so ... it's time to move on. Someone also started a Christian paper crafting social network (very much like Paper Craft Planet, only Christian-focused), which may have drained off some of my participation. So, I'll just point people there and go on with life.

Okay, that's all for now. I promise I'll be back, just maybe not as frequently as I have been. And then I'll get through this phase and I'll be back as regularly as ever. That's just how I (and other ADHD people) function.

Grace and peace until next time!
Posted by Stacy at 10:39 AM 2 comments: