So ... I've actually been scrapping lately. A lot. But I can't show the stuff I'm doing because it may end up being Christmas presents, and just in case anyone who would be a recipient reads my blog, that wouldn't be good, KWIM?

I will, however, show you one of my two (so far) Texas history layouts. Jean Daugherty of Heritage Scrap (and DigiZines Studios, now, too) made me a Texas history kit when I put in a request in the HS forums. I may have told you already, but I'm going to tell you again because I don't remember what I said. Anyway, it is a GORGEOUS kit, and I only hope I can do it justice!

This is the first one I did. It's about my 5-greats grandfather who was one of the original settlers in Texas with Stephen F. Austin. (Those folks are now called the "Old Three Hundred.") There is so much to tell about Alexander Hodge, hard to just get it down on one scrapbook page, but I think I managed to condense it fairly well. Of course, there are no photos of him, and I don't even know if there were ever any paintings/drawings. We certainly don't have them if they exist. So it was a bit tough to figure out how to do a page that was all about the journaling without it just being boring. Here's what I came up with: 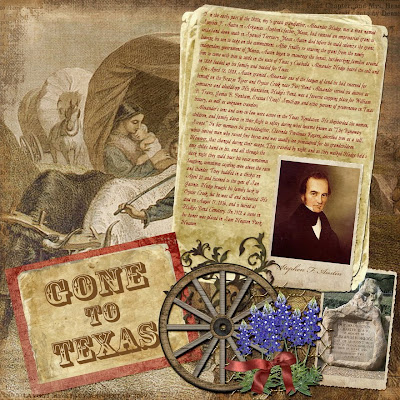 Gorgeous stuff (Jean's, not so much mine). I think pretty much everything is from her kit, which I purchased from Heritage Scrap, but it's on the DigiZines site, too. I'll show you the other layout next time.

Now I just need a kit about the U.S. Navy so I can scrap my dad's Navy years ...

Anyone want to hear about the medical front in my life? Well, if not, you're probably done with the post now. If so ...

I went to a sleep doc last week who thinks I may have narcolepsy, never mind that I don't suddenly and "accidentally" fall asleep during the day, and I don't have the cataplexy that a lot of narcoleptics have (something about sudden emotional stuff making you go weak, like laughter or anger). Trust me, I laugh enough to know I don't have that aspect. But he said that I have a LOT of the other symptoms, like a "fractured sleep architecture" and messed-up REM cycles. My utter, total exhaustion during the day is a pretty good sign, too, although there are heaps of disorders and illnesses that can cause that.

Anyway, because of that, rather than make me go back to the sleep lab to do the daytime test, he's just going to go ahead and try me out on some medicine. You take it at night, and it's supposed to help you have deeper, more restful sleep. Downside is you have to wake up three hours after the first dose to take the second. Also, it makes you SO sleepy that it can be disorienting if you have to get up in the middle of the night for anything. And it can make you very woozy if you have to get up. No driving for six hours after the last dose. It's very high in salt, so I'll have to really watch my blood pressure. For the first couple of weeks it can cause headaches and nausea. And if I don't have narcolepsy, it won't do anything other than just make me feel weird (i.e., it won't make me feel more rested in the mornings). Also, it's a "regulated" medicine. Which totally freaks me out. I have to keep it hidden away, if anyone steals it from my home I have to let the police know, etc. Did I mention I'm freaking out?

I have my first try with it tonight. I'm afraid I'll stop breathing or something. Or I'll get really sick. Or I'll have one of the "rare" nasty side effects. Or, worst of all, that it won't work.

Something has to work. If this doesn't, or if I can't take it, I really don't know what I'll do. I am DESPERATE to feel better, to stop having so many stupid illnesses, to be able to function like other people. Right now there is no way I could hold down a job. Fortunately I'm able to take care of my family, but mainly because they aren't here during the day, so I can rest (which is why digi-scrapping is such a good thing -- I haven't felt up to paper scrapping). I've had so many tests, all of which come out negative (which is a good thing, but leaves me with no answers). My doc figured I had sleep apnea, which is why I did the sleep test, but I don't.

Another thing is, I am so SICK of the weird, complicated, exhausting dreams I have all night! This is part of the messed up REM thing. Normally people go into non-REM when they first fall asleep and don't hit the first REM stage until about 1-1/2 hours later. Not me. I go straight into REM sleep and spend more than my fair share of the night there. A couple of nights ago I had this really stressful one involving tornadoes. Last night I dreamed about Phil Joel, skateboards and the girl Aidan likes. Among a lot of other things. I used to like dreaming, but not any more. If I never remembered another dream I would be ecstatic. I always feel like when I lay down I just close my eyes and go into an alternate universe, where I do all kinds of stuff all night long, and come back to my normal universe when the alarm goes off in the morning. Really. Really. Exhausting.

So, there, my long tale of woe. I hope I still have any readers and/or friends left after that. Sometimes it's just hard to hold back the need to talk about it. I spend so much time trying to mask it, paint over it, push through it, minimize it that I feel really uncomfortable when I let it all spill out. My mom doesn't mind me complaining, but everyone else in my family does.

Now, life is not all bad. I realize I have a ton of things to be thankful for, and I truly am grateful for them! And I have God to help me get through each day. But I'm ready for a positive change now, and really, really afraid there will never be one. I'm only 46. I shouldn't feel like I'm 86.

So, enough of my whining. I promise next time not to spill all over you. Unless the medicine proves a problem ... ;-)
Posted by Stacy at 8:58 PM