The month that wasn't

February was ... not a good month. And I'm not sure how March will be. The strep came back a third time, I tried Ceftin, which made me sick as a dog, so now I'm back on the Amoxicillin for two weeks (one more week to go). I'm not sure I'm making a lot of progress. I felt a bit better for a couple of days last week, but didn't feel well this weekend at all, and I've got smallish white spots on my tonsils, still, that keep migrating around. So I don't know.

And as I mentioned before, Strep is NOT conducive to visual creativity. I've been able to write (on the days I haven't felt like garbage), but not scrap. I don't know when that gift will come back to me. No mojo whatsoever. And then I had to get a new computer, and I think I've lost my Photoshop Elements digiscrapping catalog, or at least the most recent version of it, which means I've lost tons of tags on tons of files, so there will be a lot of designers I won't be able to credit for certain of their creations. I'm trying to figure out where a more recent version of my catalog is, but it's not looking too hopeful.

I do, however, have a couple of layouts to show, things I finished before the Strep took over my life. Here they are: 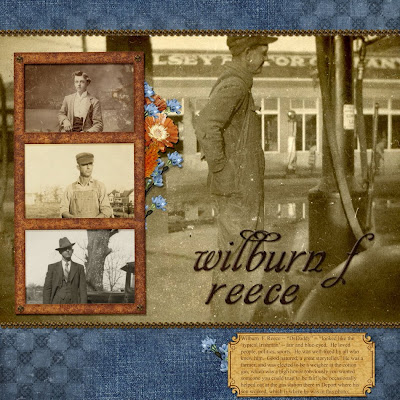 This is my mother's maternal grandfather. She called him "DeDaddy" which is now what my son calls my dad. It occurs to me that I'm not sure I was finished with the journaling, I'll have to check that later. (I've got a nasty headache at the moment and don't really feel like doing much.) Somewhere I have a list of the elements credits, but again, don't feel like hunting it down. Suffice it to say I did not create any of the elements in this layout, just the layout itself. 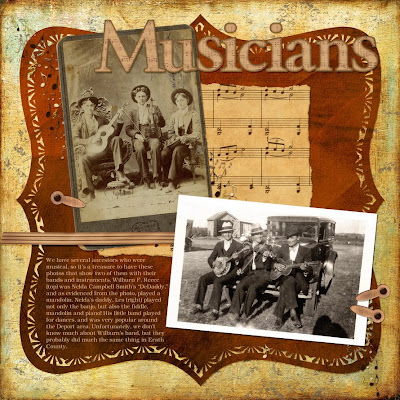 The top photo includes, again, Wilburn "DeDaddy" Reece (far right) and the bottom one has my mama's daddy Les Campbell (on left with banjo). I LOVE that we have these old photos of them with their bands (or at least with buddies they played instruments with, I don't know if they were official "bands" or not). The musical gene runs deep in my family.

So I'm still stuck with this catalog issue. I guess if I can't find a more recent one than the one that's easily accessible, I'll just have to go with it and update new stuff as I purchase/download it. I don't keep my elements in their kits after I've catalogued, them, I split the kits up and put the elements in their respective folders, like "Papers" and "Butterflies" and "Word Art." The Organizer tags are what keep track of the kits, designers and stores/sites for each piece. What a mess.

Anyway, I hope I still have a couple of readers left after my hiatus. I don't know when I'll get back to digiscrapping, since now my writing is occupying my head (and since I'm still confused about my PSE catalog), but please don't go away and give up on me. You know I'll be back!